The entire 70th Week is not synonymous with the Tribulation period. Nor is the Great Tribulation equal to the Day of the LORD.  Nowhere in Scripture are they used interchangeably or made synonymous with the 70th Week.  There are 3 distinct sections to the 70thWeek: the Beginning of Sorrows (Mt. 24:8), the Great Tribulation  (Mt. 24:21), and the Day of the LORD (Mt. 24:30-31).  The 70th Week will begin with the signing of a covenant, or peace treaty, between Anti-Christ and Israel (Dan. 9:27). This will initiate the Beginning of Sorrows as described in the Olivet Discourse (Mt. 24-25) which parallels the 7 Seals in Revelation 6. The same sequence of events (anti-Christ/false Christs, War, Famine, Death, Abomination, Persecution and Death, Signs in Sun, Moon and Stars, Rapture) in the Olivet Discourse and Seals, is also found in the book of Daniel (ch. 7, 9, 11, & 12) and I & II Thessalonians.

Also occurring at the midpoint: 144,000 Jews are sealed as a mark of God’s ownership and protection throughout the last half of the 70th Week (Rev. 7:1-8). Elijah comes as one of the 2 witnesses who preach throughout the last half of the 70th Week (Mal. 4:4-5; Rev. 11). The War in Heaven is settled and Satan is hurled to earth and makes war (Great Tribulation/Time of Jacob’s trouble) on the Woman (Israel) and her offspring (Christians) (Rev. 12:7-17), while Michael (Israel’s protector) stands still and ceases to restrain Satan (Dan. 12:1; 2Th. 2:7).  The False Prophet through counterfeit signs and miracles deceives the world into worshiping the Beast who had a fatal wound that was healed (Rev. 13:11-17). God sends 3 Angels: 1 to proclaim the Gospel to the world, 1 to proclaim the downfall of Babylon, and 1 to warn the world of the consequences of worshipping the Beast or taking his mark (Rev, 14:6-12).

The Rapture and the Wrath will be back-to-back events. As described in the Gospels, the cosmic disturbances occur immediately after the Great Tribulation and then the Son of Man appears in the clouds (Mt. 24:30-21; Mk. 13:26-27; Lk. 21:25-28) with power and great glory (the same Shekinah glory of the pillar of cloud by day and pillar of fire by night of the Exodus) and He sends His angels to gather the elect, a.k.a. Rapture the saints. God doesn’t exempt His people from man’s wrath, but He does exempt them from His wrath (1 Th. 1:10; 5:9). This will occur sometime in the 2nd half of the 70th Week, day and hour unknown (M. 24:36).

This will also be the time of the national repentance and salvation of Israel (Zec. 12:10-14).  The survivors of the Day of the Lord will then be judged at the Sheep & Goats Judgment (Mt. 25) to determine if they will be allowed to enter the Millennial Kingdom and celebrate at the Wedding Supper of the Lamb (Rev. 19:7-9). The Bride of the Lamb will come down from Heaven with the New Jerusalem; the Earth and Heavens will be renewed (Isa. 65:17-66; Rev. 21-22). The saints will rule and reign with Jesus for 1,000 years (Rev. 20:4).

Revelation of the 70 Weeks

The Beast: The Anti-Christ

Twas the Night Before Jesus Came

Summary of The Pre-Wrath Rapture

Summary of The Pre-Wrath Rapture of the Church

1) The Bible teaches that there is still a future 7 yr. period during which the Anti-Christ will arise, the Great Tribulation will occur, the Church will be Raptured, & the Day of the LORD’s wrath poured out. This timeframe is called the 70thWeek of Daniel, never the Tribulation (Dan. 9:24-27).

3) The Bible teaches that the Great Tribulation, a.k.a. “Time of Jacob’s Trouble,” begins in the middle of the 7 yr. period, but does not continue until its end. The Great Tribulation is cut short & followed by cosmic disturbances (Mt. 24:22; Mk. 13:24-25).

4) The Bible teaches that Elijah must appear before the Day of the LORD commences (Mal. 4:4-5).

6) The Bible teaches that cosmic disturbances immediately precede the Day of the LORD (Joel 2:31)—the same event described with the opening of the 6th Seal which is sometime within the 2nd half of the 70th Wk.

7) The Bible makes clear when the Day of the LORD commences—no guesswork. It will commence with the opening of the 7thSeal (Rev. 6:17).

8) The Bible teaches that the Day of the LORD is a time of unprecedented judgment on the whole earth and also a time of purifying Israel (Zech. 13:8-9).

10) The Bible teaches that the 2nd Coming of Christ (parousia) speaks of a coming and continuing presence to accomplish a number of Divine purposes. It will begin with the Rapture and be followed by the Day of the LORD’s wrath and the LORD’s literal Return to the Earth.

13) The Bible teaches that the “end shall come” (Mt. 24:14) with the opening of the 7th Seal. The righteous (wheat) are Raptured (harvested into God’s barn), and then the unrighteous (tares/weeds) are judged (harvested and burned) during the Day of the LORD concluding with Christ’s physical Return to the Earth.

14) The Bible teaches that at Christ’s Return, a surviving remnant of Jews will be regathered to Israel and saved. God’s covenant promise to Abraham, Isaac and Jacob will be literally fulfilled (Hos. 6:2; Mt. 24:31; Rom. 11:25-26). 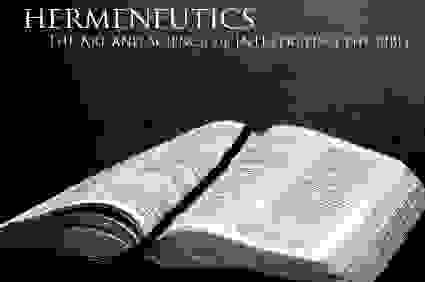 Hermeneutics must be consistent and without contradiction. It must not be governed by a theological predisposition or school of thought.

1. The principle of Literal Interpretation

All Scripture is to be taken in its literal and normal sense, allowing, of course, for obvious symbolism and figures of speech. Every passage must be taken at face value whenever possible; with the same normal understanding of words and symbolic language with which we read any other serious book or carry on any serious conversation. In regards to prophecy, it is a matter of biblical principle to expect the many prophecies of Christ’s second coming to be fulfilled with equal literalness and completeness as the prophecies of His first coming were fulfilled. Prophecy that is not literally fulfilled is not true prophecy.

2. The principle of Context

The context of a word, phrase or longer passage involves careful understanding of the complete Bible book being studied, carefully interpreting a given idea or principle in light of the overall thrust and nature of the book as well as in light of its immediate context. A text taken out of context us no more than a pretext.

3. The principle of Comparing Scripture with Scripture

A word, phrase, or concept should be first of all be studied in light of its use in the Bible book being studied and then in light of its use in other passages of Scripture. When a given text is not explicit about a truth, no conclusion should be drawn about that truth until all relevant passages have been studied. Those truths which are more implicit always need to be understood in light of those which are more explicit, and never the reverse. Because Scripture is always its own best interpreter, careful comparison always adds depth and clarity to our understanding.

4. The principle of No Antinomies

An antinomy is “a contradiction between two apparently equally valid principles of between inferences correctly drawn from those principles” (Webster’s Ninth Collegiate Dictionary). No interpretation is valid that does not genuinely harmonize with all the passages. Since God’s Word is inerrant, it cannot be self-contradictory. If two passages seem to contradict, truth has not yet been discovered, and no position should be taken. Keep looking. Eventually a higher common denominator will be found that perfectly harmonizes the critical passages in question.

5. The principle of Near/Far Predictions

Many passages of Scripture, in both Testaments, have both near and far implications and applications. Prophecy often operates on two levels of fulfillment. On the first level, there is a divinely revealed “near” prediction relating to a soon-coming event. But on a second level, there is a corresponding “far” prediction that will be fulfilled at a later time, or in the events of the End Times. For a near/far interpretation to be valid, it must clearly be allowed for by the context and b specific wording of the text itself, as well as be consistent with the rest of Scripture.

6. The principle of Author’s Style

Different terminology and styles of the writers will describe the same event or issue with equal and consistent truthfulness, though often not in the same detail or from the same perspective, ex. Psalm 22, Isaiah 53 and Daniel 9:26 which all describe the Messiah being cut off in relation to the crucifixion.

7. The principle of Increased Understanding

Our understanding of the End Times will continue to increase as history continues to unfold and verify biblical prophecy. The modern student of prophecy has the great advantage of looking back, as it were, and learning from the fulfillment of prophecy as revealed in the New Testament, or as recognized in subsequent history. Dan. 12: 4 & 9 indicated his words were to be “sealed up until the end of time.” When the end times come, therefore, the Church will have a long historical base from which to gain understanding of many of the prophetic passages that hitherto were a mystery. Since Israel gained possession and control of her homeland in 1948, for instance, we have a perspective on prophecy that could only be surmised previously.

Copyright © 2020 No Apologies.info - All Rights Reserved.